Industrial tourism according to TrattoPunto, a network at the service of ERIH

Industrial tourism according to TrattoPunto, a network at the service of ERIH

Last May, TrattoPunto accepted the invitation to participate in the 5th Annual Meeting of ERIH Italy entitled "After the lockdown: new ideas for industrial tourism in Italy".

The meeting was created to imagine strategies to relaunch the initiatives of European network members at a time of resumption of normal activity after what happened due to the pandemic generated by the spread of the Corona virus.

TrattoPunto is a network of professionals who, for years, have been working, in various ways, on industrial heritage. The network deals with the enhancement, through the design of visiting itineraries, of the Italian industrial heritage, with an eye to that clientele, Italian or foreign, which, even inexperienced, could be able to appreciate the values ​​of Made in Italy, historical or contemporary they may be.

A network of professionals created to bring out the potential of attractiveness and interest towards still little known architectural places, raising awareness of the conservation and enhancement of industrial sites and material culture, by creating itineraries that are able to combine history and local traditions.

TrattoPunto goes beyond the narrative of imagining and creating a product that can be purchased from the final user, the one-day visitor or the tourist who is entertained beyond, in an itinerary structured for several days, including overnight stays.

Values ​​and affluence of communities and territories which, according to the aspect that characterizes the action of TrattoPunto, are interspersed with more properly industrial destinations, in a fruitful relationship of cause-effect between histories and environments that have generated particular and characteristic industrial examples which, in turn, they have shaped, over time, communities and territories which host them.

Our network collaborates with companies, trade associations and local public institutions to bring out these relationships and, with a pinch of creativity, connect them in order to offer an integrated touristic and visiting proposal which combines traditional touristic destinations with those linked to human know-how. TrattoPunto proposes its very own solutions which can be read as real territorial marketing actions. Traditional cultural heritage is made even more attractive because it is not only and not exclusively enjoyed but approached laterally, in an innovative and captivating way, through a visiting experience which includes access to production sites, food & wine tastings, informed purchases at company outlets and photographic walks to sites of real industrial archeology.

With this spirit, TrattoPunto accepted the invitation to participate in the ERIH Italia Meeting last May, a meeting created in order to imagine strategies for re-launching the activity of the members of the European network in the moment of returning back to normal activity after everything that has happened due to the Covid-19 pandemic.

The intention was, right from the start, the one to imagine a proposal for a Grand Tour of the ERIH sites, on the basis of what have been, famous in history, the numerous Trips to Italy of the young European aristocracy, literati, historians and artists, often published in volumes which have created a real literary genre.

Therefore, starting from a survey of the sites currently belonging to the ERIH network, whether they are Anchor Points or member sites, an itinerary was imagined that includes them all and that, step by step, provides the possibility of an expansion of the visit to the environment, in order to know closer the community and its values, industrial and other, located in the proximity of the particular ERIH site. These possibilities of staying and explorating the territory on which the single destination of the Grand Tour insists, have been thought for at least two levels: a visit in which the experience ends in the day, therefore strongly linked to the ERIH site and its meanings (the visiting times are obviously also linked to the density of contents of which the site is witnessing) and a more properly called tourist proposal, in which the user of the Grand Tour can find in the ERIH site not so much a destination of a journey but a starting point for traveling through the territory of which the site is a part and, through it, to be able to interpret the values ​​of the territory, of the environment, of the history and of the community in an innovative way. In this case, the tourist will be able to benefit from an in-depth visit that will enrich the presence of values ​​linked to the industrial heritage with destinations belonging to the different areas of the traditionally understood cultural heritage, be they, for example, historical, artistic or food and wine.

Thus some illustrative proposals were born linked to some of the possible stages of this tour to discover the Italian industrial heritage, proposals that were presented during the meeting and which are not a simple exercise method; these proposals have already been tested and proposed on the market with good results, both in economic terms and in terms of customer satisfaction.

The sites of the Poli Distilleries and Museum were addressed, based on the intentions discussed above, along with the visit of the Bassano Headquarters of the Museum and the attractions of the town situated at the foothills of Monte Grappa or else together with a very own tourist proposal, a route was imagined along the Pedemonte of the Veneto region, which intersects industrial destinations, even of considerable importance, such as the city of Schio, famous for the history of the Italian textile industry and which sees, as a starting point, the Anchor Point of the Poli Distillery located in Schiavon (VI).

A subsequent stage of the Grand Tour is the one that concerns the territory of Lombardy and that revolving around the site, also Unesco Heritage, of the Village of Crespi d'Adda, from which numerous proposals for visits can depart, along the course of the homonymous river, discovering the industrial history of the nearby city of Milan or as far as Dalmine, in order to meet another, not far away, site that is a member of the ERIH network, the Dalmine Foundation.

Another proposal is that concerning the city of Bologna; here, even more, we can understand how the industrial heritage is the key to a multiple interpretation of the values ​​which shape and construct a territory and its history distinctive. The numerous possibilities of interpretation, also in a historical key, of the territory provided though what is exhibited in the Museum of Industrial Heritage, can allow the touriste to exit the museum and to face a series of paths ranging from the rediscovery of the presence of the city waterways up to the in-depth knowledge of the history of the so-called Motor Valley where the famous names of Italian motorcycle and car production insist with real legends such as Ferrari, Ducati, Maserati and Lamborghini.

To conclude, before some examples that are more properly linked to territorial marketing actions that TrattoPunto is carrying out for public and private administrations, the case of Sardinia was proposed, where, thanks to the collaboration with Sulcis Hiking & Bike, two tour itineraries, by bicycle of varying difficulty, were designed with which you can reach the ERIH sites of the island and which are witnesses of the great mining tradition, now a monument of itself, which has been the protagonist of the island's economic development.

The proposed method, which can be improved according to the needs of the individuals belonging to the ERIH network and expandable to all of them, is a starting point for a collaboration proposal that TrattoPunto launches at ERIH, not only exclusively for the Italian members; a concrete proposal that becomes a commercially valid and attractive product to be placed on the European touristic market. 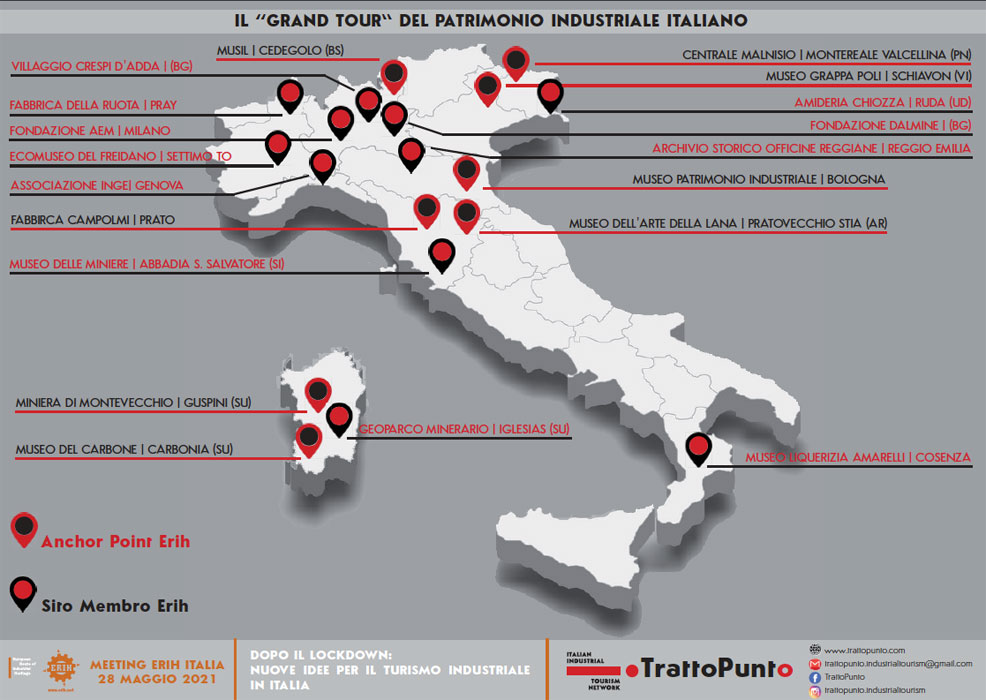 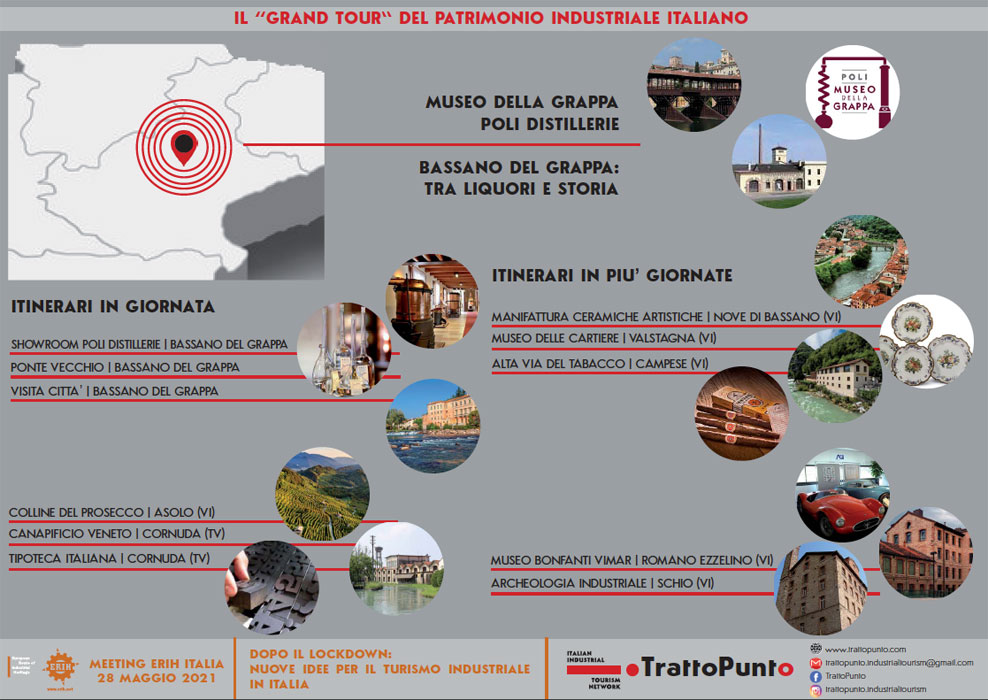 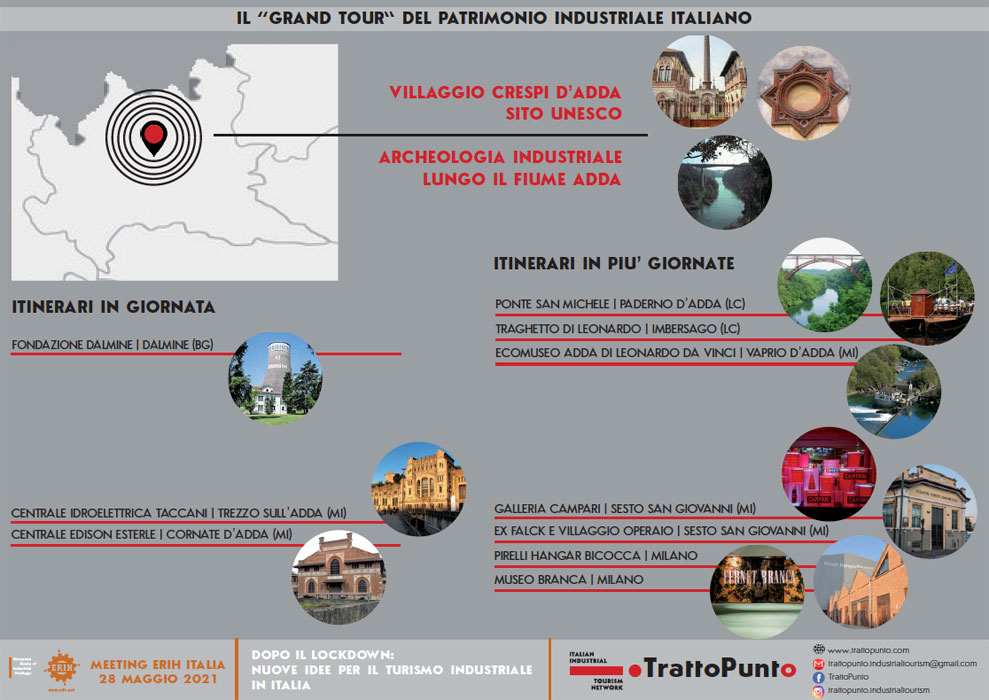 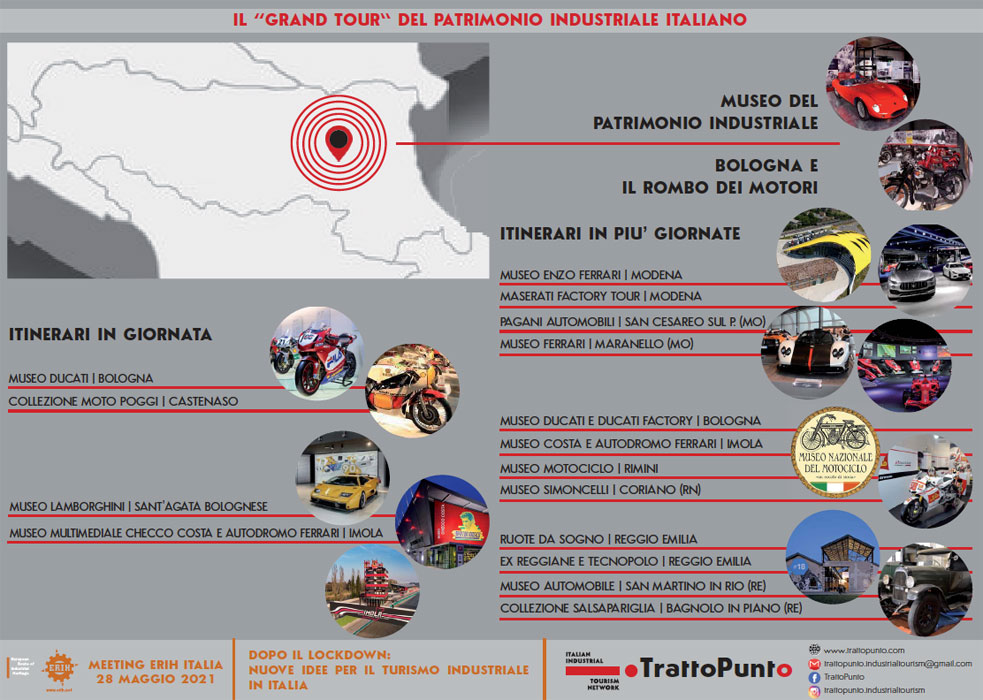 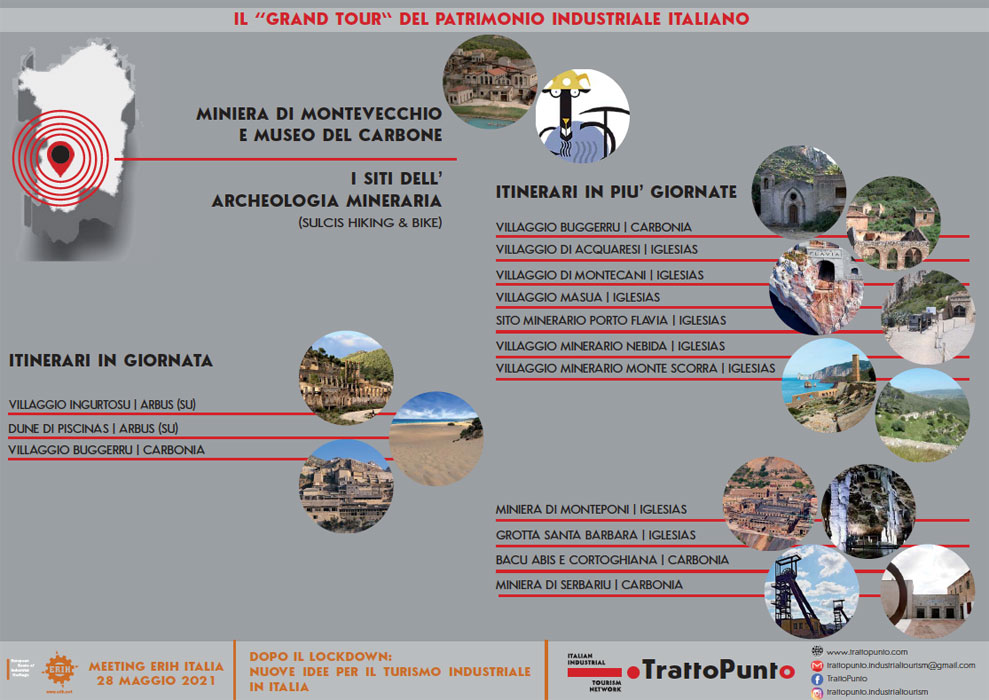 TrattoPunto offers specialized services oriented towards cultural brand marketing, from scientific consultancy in the field of archeology and industrial heritage, to museological and museographic design, from knowledge actions of industrial heritage to the organization, with accompaniment, of rediscovery itineraries of made in Italy.